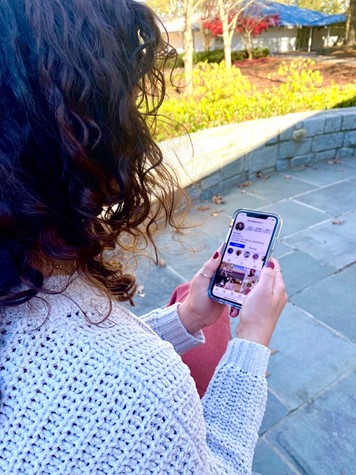 According to the American Academy of Child and Adolescent Psychiatry, 90% of teenages, ages 13-17, have at least one social media account. However, during this time of constant social media engagement and digital personas, how can teenagers discern reality from fabrication? To answer this, I asked several Athens Academy students to participate in an anonymous survey regarding their self image and their identity as it relates to social media.

The first student questioned was a non-social media user. When they were asked if they believe social media has affected them, they responded, “Not having social media has its pros and cons. I don’t connect with as many people, but also I don’t have that constant insecurity that some people get from seeing others whose lives are supposedly ‘perfect.’ I definitely think that I would be a different person if I had social media, but not to a very severe degree. There are so many benefits and so many people that you can see and meet through social media–it’s quite amazing. Who knows, maybe my life would have been altered if I had social media at a young age, but even with that thought, I wouldn’t change who I have become without having it.”

Similarly, a student with social media also believes that it has allowed them to connect with others.

“Social media has made it possible for me to make friends,” they said. However, it has not had a solely positive effect. “I think that if I would have avoided using it all together, I would like my appearance more. My self-image has changed a lot and I am always looking in the mirror asking myself if the people on TikTok would think I was pretty. … It definitely is a blessing and a curse.”

Many people often view social media as fake, duplicitous, and unrealistic. Reflecting on this concept, a student reported a different issue brought by social media: the concept of fantasy  versus reality.

“I mean there is an element of reality to it, but it’s hard to tell. The people who post on social media are real, so I guess it is reality, but there’s a lot of stuff on there so it’s really hard to tell what is real and what is photoshop. I definitely used to think it was reality, but as I’ve grown up, I can tell that it’s mostly just a small group of the world that believes in some of the stuff on social media.”

While the responses share some commonalities, it is fair to say that each social media user has had a very specific, and impactful, experience with social media platforms. Social media will continue to be a topic of conversation as we progress through the digital age, and I believe that in the future, identity and self-image will largely be affected by social networking.

My question for you is: Will you let it affect you?