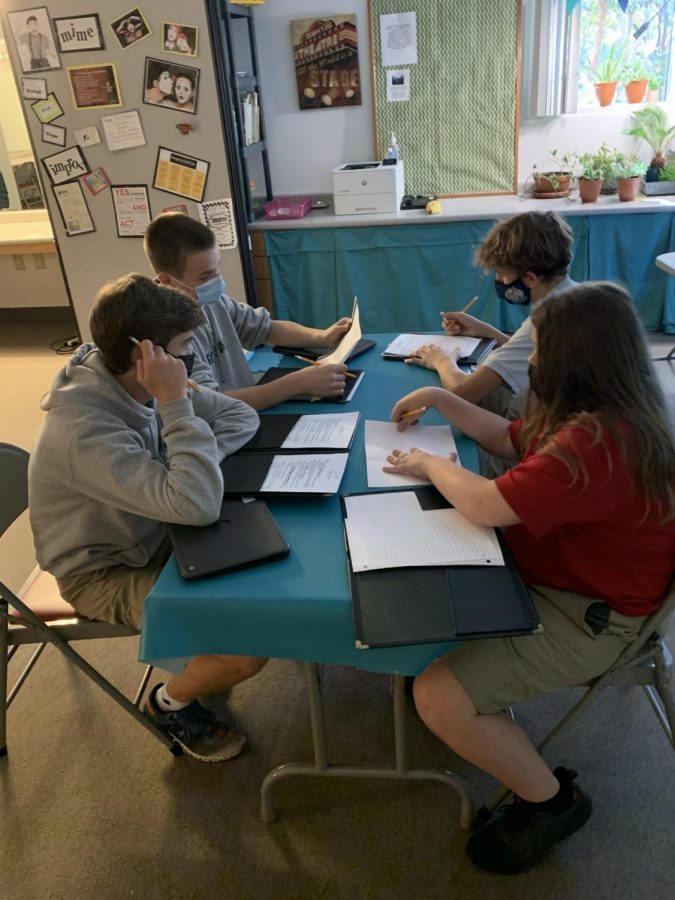 This semester, the Athens Academy Grade 8 drama classes are studying the art of playwriting and production. Over the course of this unit, we’ve all refined our writing, acting, and producing skills, explored an entirely new art form, and had tons of fun!

In Ms. Thompson’s class, we began by spending several weeks working in small groups to construct a 5–4–3–2–1 format play. As per instructions, each play had five minutes, four scenes, three characters, two playwrights, and most importantly, one play.

After we finished our scripts, the class spent a day voting on which  three plays to take from page to stage–through the casting and rehearsing processes, all the way to the final step: performance.

Ultimately, Ms. T’s class chose “The Sneaky Spend-the-Night” by JD Daniel and HT Garrard, “The Red Carpet Disaster” by Fulton Wiant and Adriana Ritchey, and “Friday Night Magic” by Tab Butler and Parker Willimon. In Mr. Dale’s class, the plays chosen were “The Audition Saboteur” by Kate Sullvan and Sofia Dean, “The House of No Escape” by Riley Harding and Annie Luke, and “Deathly Predictions” by Kai Kelley and Brooks Johnson.

With the plays and their respective directors selected, we moved on to casting. First the designers and publicity team were chosen. From that point forward, they would work with the directors and teachers to make sure everything would go smoothly behind the scenes.

Selecting actors and finding the best possible combinations for the plays was a quick process–there seemed to be a role made for everyone! The students quickly separated into small groups, in which they would continue to work until the completion and performance of the plays in early December.

The rehearsing process was so fun! Everyone had a great time getting to know their teams and characters, and there were barely any bumps in the way. And while we have yet to perform our plays, I’m sure that they will go equally well.

The playwriting process is a valuable concept to know, right along with the format of an essay or a formula in math. In addition to opening our eyes to a whole new genre of writing and performing, it complements the rest of our writing education.

In writing a play, students have a chance to put on paper what they can’t, for whatever reason, say out loud. They feel like they have more of a voice than they had had before the unit began. And, as with any form of creative writing, playwriting builds creativity and the sense of self-expression.

After the completion of the plays, the chosen directors enhance their leadership and management skills as they work with the actors and designers to bring the script to the stage. The actors build confidence in themselves and their self expression through their characters. And the designers learn composition, artistry, and problem-solving in their efforts to make the backstage details run smoothly.

We’ve all really enjoyed this unit in Drama. “(The unit) was a great opportunity to take our original scripts through a direction process,” HT Garrard says.

Similarly, Johnathan Ransom, an actor in “The Sneaky Spend-the-Night” adds, “I didn’t know that much about playwriting before, but it’s really fun!”  And representatives from the rest of Ms. T’s class agree!

When asked for his opinion on the unit, Buck Talley, an actor in “Friday Night Magic” says, “It makes you think, and helps you work with other people.”

Isabella Salguero, a designer in “The Red Carpet Disaster” gives some insight on the designing process, saying, “It was really hard to figure out how to make things work together, but after that it’s a fun and easy project.”