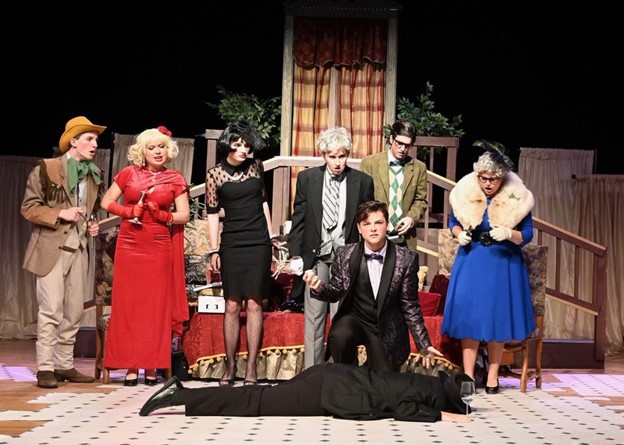 As the lights came on and the cast prepared to deliver their first lines, their faces lit up with excitement as they saw the packed audience.

Athens Academy’s production of the comedy “Clue” opened on April 21 to an enthusiastic crowd.

A rendition of the 1985 movie and based on the classic board game, the play was a big hit and was attended by students, faculty, and friends alike. This murder mystery featured amazing sets, props, jokes, and much more.

“As someone watching it, I was obsessed with the costumes. I loved them. At intermission, everyone was talking about the costumes and how good everyone looked,” junior Lucy Rentz said.

The cast and crew thought one of the most distinctive features was the huge turnout.

“I think the fact that people came (was the most successful part). You could feel the love, not any judgment. It was just pure support,” said Lorraine Thompson, head of drama department and play director, also known as Ms. T.

The cast thought it was refreshing to see all of the supporters, especially considering that there haven’t been many full houses in the past few years.

Senior Lexi Sennowitz played Miss Scarlet and reflected that it was a great performance. “It was a big success, and the whole entire cast was able to bond a lot because it was a very fun, yet calm show,” Sennowitz said.

Thompson expressed struggles with expectations since most people had seen the movie. However, the film provided a helpful reference for designing the set, costumes, and overall tone.

Regardless, adapting the movie for the stage provided its own challenges as the performers had to modify some of the jokes.

“It’s just a funny movie, and it’s not as big and exaggerated as we made the play to be,” Thompson said.

Aware of the revised humor, the cast was wary about the audience’s response.

“I went into the play not really thinking anything was funny because I’d said the jokes so many times during rehearsals, but then when I said them (at the show), people really laughed and I was like ‘oh yeah!’” said sophomore Patrick Rodrigue, who played Mr. Green.

Given the success of the play, Thompson is looking to try a greater variety of shows in the future. She recognizes the impact that well-known scripts like “Clue” have, but she also knows the importance of diversity.

“You don’t have a diet of candy, so you can’t only have plays like ‘Clue.’ I mean you need some substance in there too, so I’ll continue to balance but I think I will look at bigger plays that I’ve just never looked at before,” Thompson said.

The play’s success was a great way to wrap up the year, and everyone is excited to see what the Drama Department puts on next year.

Rodrigue says, “Plays are awesome. Do the play!”