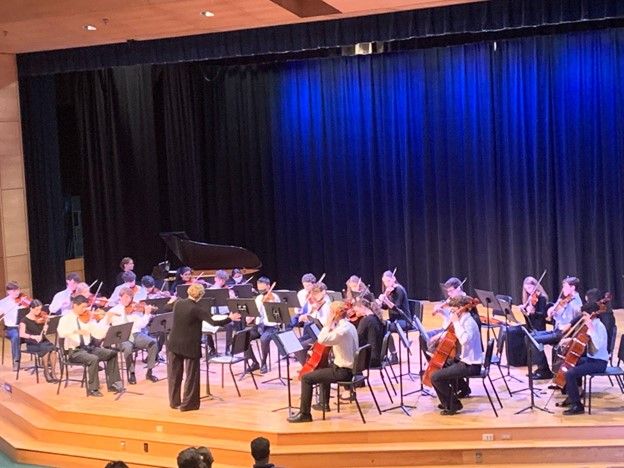 Their sore fingers lift up from the number of violins, cellos, violas and basses. They bow to the audience and give each other a smile. It’s the end of another successful year for the Athens Academy musicians.

Both the orchestra and the band held their final performances in April and had great success with their concerts, playing beautiful compositions, classics, and student favorites.

“Luminaria is a student-led performance with students selecting the music and leading the rehearsals,” said Debbie Schab, upper school orchestra director. “Our concert is a more traditional string orchestra concert with a mixture of music genres–classical,  broadway and movie hits.”

The orchestra concert includes Baroque and classical music, like Mozart’s “Presto” in D major, as well as more familiar pieces, like Oscar-winning “Skyfall” from the 2012 installment of the James Bond franchise.

The band program has seen difficulties due to the Covid 19 Pandemic over the past few years, but in spite of that, they produced an excellent performance, with the unique addition of the guitar class playing along with the Band for the song “Enter Sandman” by Metallica.

“All it took was to adjust the guitar parts and what they had been learning was to use a capo on the first fret which just adjusts all the notes that the guitars play up a single fret,” says Christopher Byrd, band director and guitar class instructor at Athens Academy. “They don’t have to learn anything new necessarily so we were able to find a way to put the two together. This was in hopes of doing more of this in the future.”

Members of the band class were just as excited for the collaboration as Byrd was.

“I did enjoy it, it was a lot deeper bass line, you could really hear the bass voices just supported the rest of the instruments a lot better especially for the song,” says sophomore Cohen Tomlinson.

The band concert was started off by three freshman students, playing rock songs that they had been practicing, like Metallica’s “For Whom the Bell Tolls.”

“Three of our freshmen who are involved in the pep band offered to add some music to the concert as well, playing a few things that we offered for pep bands but that we never got to perform for a full concert audience, only the football games and the crowd there. So many of the parents haven’t had an opportunity to hear these,” Byrd says. “And almost all of this work on this music has been extracurricular, either after school or before football games, or in the last 5-10 minutes in our class periods.”

The guitars also showed their skills off that they had been practicing all year, with pieces such as  “Should I Stay or Should I Go” by the Clash. The band and guitar class then performed their collaboration, “Enter Sandman,” before the band took the stage to end the concert, with pieces including “Freeze Frame” by the J. Geils Band and “The Chicken” by Jaco Pastorius.

Both concerts were a smash success and gave students in the orchestra, band, and guitar classes a chance to show off their hard work this past semester.